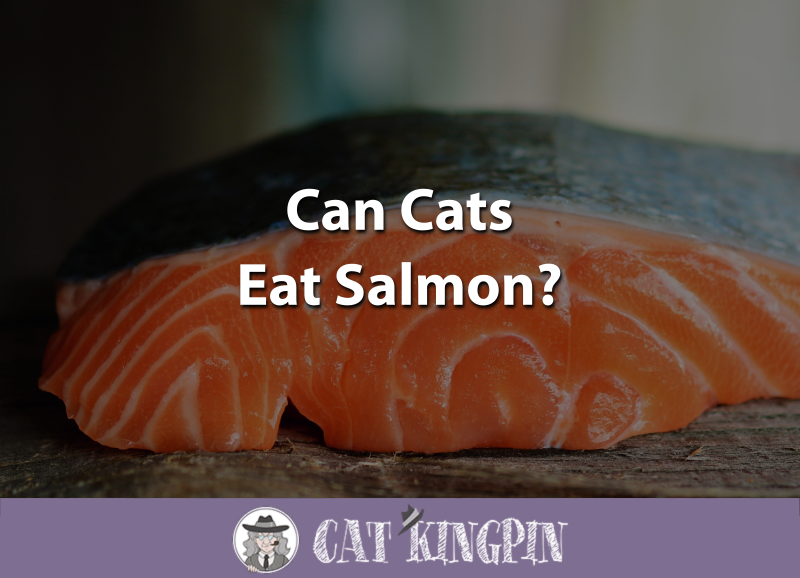 If there is a cat out there that doesn’t love fish, I have yet to meet them. In fact, fish and milk are the people foods most commonly associated with cats.

But, how well does this popular perception mirror reality? The real question is, even if cats love it, is salmon actually a healthy food for cats to eat? Can cats eat salmon?

Cats and Salmon, What You Need to Know

Today, salmon is generally eaten cooked or as lox, which means the salmon is smoked or cured in brine. Growing in popularity is raw salmon, which is eaten as sashimi, or as a component in sushi.

As the video below shows, cats do, indeed, love salmon:

Yes, cats can eat salmon. However, it’s only safe if it has first been cooked, cured, smoked or frozen under specific guidelines.

Even then, it is best to give salmon only in moderation. While salmon may make a great treat, it doesn’t provide all of the nutrients that a cat needs, and so should never be given in place of a high-quality cat food.

As the next video shows, some cats prefer raw salmon  to wet cat food:

Whether raw salmon is safe really depends on whether the salmon was previously stored frozen.

The raw salmon served at sushi joints is actually a special preparation of the fish. In fact, it was only with the advent of modern refrigeration that the Japanese began consuming raw salmon.

The salmon that becomes sashimi has been chilled to specific FDA guidelines. This means that the salmon must be frozen to very cold temperatures for a certain number of days.

Generally, the colder the temperature, the fewer days the salmon is stored. Fresh salmon bought at the grocery store may not have been frozen at all, or not frozen sufficiently, to kill parasites that can be present in raw salmon.

Unless you know that the raw salmon you have has been frozen specifically to be safe for human consumption, you shouldn’t feed it to your cat.

While hot-smoked salmon is considered to be safe, certain cold-smoked and brine preparations do not meet the FDA’s guidelines for safety.

Your best bet is to stick with cooked salmon or sashimi.

Salmon skin is really no more or less dangerous to adult cats than cooked or properly-frozen salmon. However, too big a piece might be a little much for most cats to handle.

To prevent any chance of choking, make sure you first cut up the salmon skin into bite-sized pieces.

Kittens tend to be even more susceptible than adult cats to most things because they are tiny and have not yet fully developed their immune systems. Toxins, bacteria, and parasites that might be present in salmon, especially when eaten raw, are even more likely to make a kitten sick than an adult cat.

Also, the small bones in salmon are usually not much of a problem for adult cats, but can present a choking hazard for kittens.

If you are determined to feed salmon to your kitten, it should be given cooked, and in small amounts. Even then, it’s best to give salmon only as a special treat on rare occasions.

Because a high-quality, grain-free kitten food has all the nutrients a growing kitten needs, it’s best to stick with something like Wellness kitten food. For a special treat, you might also try giving your kitten the salmon recipe Taste of the Wild kitten food.

In small amounts, properly-prepared salmon can be a healthy and nutritious treat for your cat.

However, raw salmon may contain worm-like parasites known as a nematodes. These parasites can cause a condition in cats called anisakiasis.

While anisakiasis is not well-described in cats, in humans the same condition can result in intestinal infections and allergic reactions. With symptoms ranging from asthma, conjunctivitis, contact dermatitis, to anaphylaxis, it’s clear you shouldn’t take a chance with your pet’s health by feeding them raw salmon that has not been properly frozen first.

Another problem with salmon is that if you give your cat too much, it can actually result in a serious health condition called pansteatitis. Also known as yellow fat disease, pansteatitis is caused by the consumption of high levels of omega-3 fatty acids along with an insufficient intake of vitamin E.

The cat’s fat turns yellow due to inflammation of the fatty tissues. Symptoms of pansteatitis include:

While yellow fat disease is a serious medical issue, it usually occurs only if fish is the main component of their diet. Furthermore, most cats will recover with medical treatment and a change to a proper diet.

Adult cats are fine to have a little bit of sashimi or cooked salmon from time to time. But, with all of the great options out there, why not try a cat food like Rachel Ray’s Chicken with Lentils & Salmon Recipe made just for them? There are also WildSide Salmon Cat Treats that your cat may love.

In general, it’s best to stick with a high-quality cat food like Merrick which is grain-free and is primarily made with meat, such as salmon, so it’s great for cats.

So, can cats eat salmon?

Cats love fish, whether it’s tuna, salmon, kippers, or even sardines. As far as salmon goes, it’s best to give it as a special treat and in limited quantities.

The main thing is not to give either cats or kittens raw salmon that hasn’t been frozen first, as it can contain parasites that could make your kitty sick. Most importantly, we saw that there are many safe and healthy salmon-flavored cat foods and treats that are great alternatives for your kitty.

If you have any questions or would like to share a story about your cat and salmon, please tell us in the comments below! We’d love to hear from you!