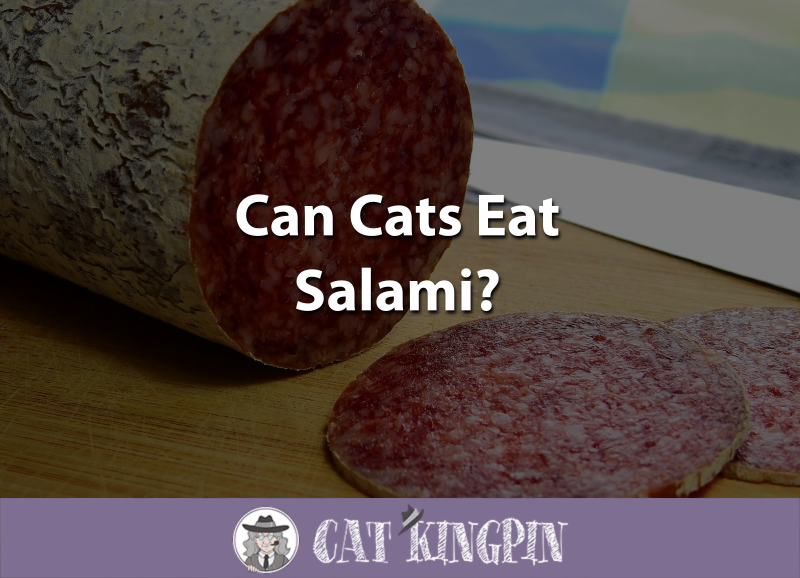 If you like to eat meat, then odds are you’ve tasted salami at some point in your life. In fact, the most popular type of pizza consumed in the United States is topped with a type of salami: pepperoni.

If your cats are anything like mine, they always want to know what you’re eating. But, before you share your pepperoni pizza with them, maybe we should first figure out whether salami is actually good for cats to eat?

Cats and Salami, What You Need to Know

Salami is a type of cured sausage, usually made of a mixture of beef and pork, which is then fermented and air-dried. In the Middle Ages, before the invention of refrigeration, salami was popular with peasants in southern and central European countries because they could store it at room temperature for over a month, allowing them to keep a fresh supply of meat available.

Being the meat-lovers they are, there’s a good chance that cats have been trying to sample salami since the day it was invented. After all, who hasn’t had a cat beg for a bit of turkey during Thanksgiving dinner?

As obligate carnivores, meat is the only food cats really need to eat and they derive little to no nutrition from plants and vegetables. But, is salami a good type of meat for cats to eat, and would they like it?

In the video below, we’ll see an encounter between a cat and salami:

As we saw in the video, cats can, and will, eat salami. The main drawbacks to your cat eating salami, as we discuss in more detail below, is that too much salami can make your kitty fat, and spicy salami can give them an upset tummy.

Most importantly, since salami isn’t cooked, just dried and fermented, it can be contaminated with bacteria, such as Salmonella.

Pepperoni is a type of American salami that is very popular. It is made from a mixture of cured pork and beef, which is seasoned with chili peppers and paprika. It is most often eaten on pizza, and is a bit more spicy than the average salami.

Let’s watch the following video and see whether cats like a little za topped with pepperoni:

Apparently, pepperoni pizza will turn your cat to a life of crime. But, is pepperoni healthy for cats to eat?

One slice of pepperoni, by itself, has about 35 mg of sodium. By contrast, the daily recommended allowance of sodium for a nine-pound cat is about 42 mg.

In humans, there is quite a bit of evidence linking increased dietary sodium levels to hypertension as well as cardiac and renal diseases. However, in cats, a 2-year study failed to show that increases in dietary salt intake were harmful to a cat’s renal function or raised their blood pressure.

Pepperoni, like most salamis, is also relatively high in saturated fats. Cats, however, process fat differently than humans. Cats can enjoy a diet proportionately higher in lipids, including saturated fats, without any negative effects. The main problem with cats eating a high-fat diet is they could become overweight.

Can Cats Get Salmonella Poisoning from Eating Salami?

Though rare, salami has been a source of Salmonella poisoning, with one outbreak in 2010 affecting almost 300 people. While small amounts of salami are probably okay to give cats as a treat, you should be aware that eating salami poses a slight, but potential, risk for your cat.

In severe cases, life-threatening septicaemia and endotoxemia may develop and in rare cases the infection may spread to different organs causing pneumonia, meningitis and miscarriage in pregnant cats. If you decide to give your cat salami, be sure to stay alert in case they start to show any of the above symptoms.

Kittens tend to be even more susceptible than adult cats to most things because they are tiny and have not yet fully developed their immune systems. Toxins and bacteria that might be found in salami are even more likely to make a kitten sick than an adult cat.

If you are determined to feed salami to your kitten, it should be given in small amounts, and even then, only as a special treat on rare occasions.

Because a high-quality, grain-free kitten food has all the nutrients a growing kitten needs, it’s best to stick with something like Wellness kitten food or else Taste of the Wild kitten food.

Adult cats are fine to have a little bit of salami sausage from time to time. But, with all of the great options out there, why not try a sausage cat food  made just for them? There are also sausage-flavored cat treats that your cat may love.

So, Can Cats Eat Salami?

Well, now we know that cats can eat salami. However, it’s best to give it as a special treat and in limited quantities. Furthermore, we learned you should stay alert after feeding salami to your cat or kitten because, rarely, bacteria could be present that can make your kitty sick.

Another potential problem with salami is the spices and pepper that go into making it. Though the amount of spices probably won’t cause any significant health issues, they could cause your kitty to have indigestion and an upset stomach. If you are going to give your cat salami, make sure you start with small amounts first.

Most importantly, we saw that there are many safe and healthy sausage-flavored cat foods and treats that are great alternatives for your kitty.

If you’re also wondering if your cat can eat other types of sausage besides salami, you can click here to find out.

If you have any questions or would like to share a story about your cat and salami, please tell us in the comments below! We’d love to hear from you!