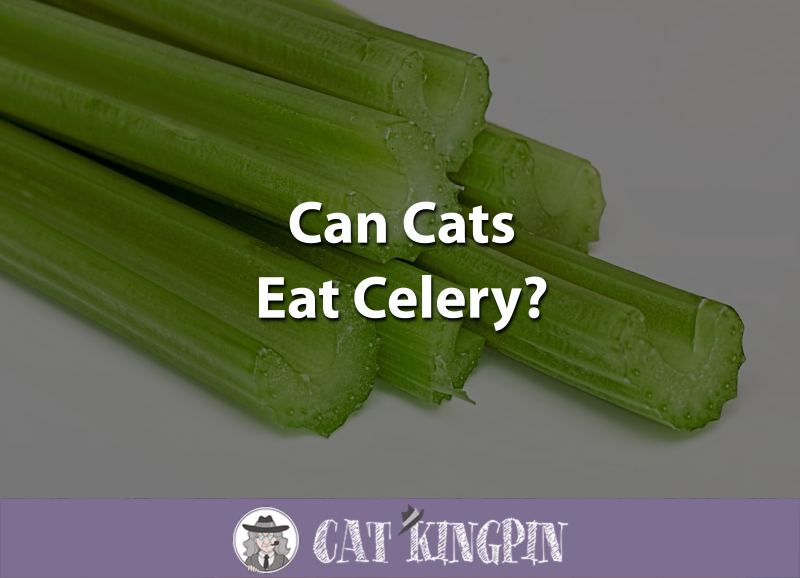 As a kid, the only reason I ate celery was that it was a vehicle for the peanut butter my mom put on it. As an adult, however, I enjoy celery both raw and in cooked dishes.

Raw celery stalks are known as a good choice for people who are trying to eat a healthy diet. You may be wondering if celery is also a healthy snack for cats. Can cats eat celery?

For the most part, celery can be a fun treat for your cat, but it really shouldn’t be the main part of your cat’s diet. Let’s find out more about celery.

Cats and Celery, What You Need to Know

Celery, known scientifically as Apium graveolens, is an ancient plant, cultivated by people since the beginning of recorded history. In the wild, celery is found in marshy areas throughout the world.

Nutritionally, celery contains high levels of vitamin K along with many other important nutrients, though in lesser amounts. Celery is also very low in fat and calories but high in fiber, making it a good choice for people who are trying to lose weight.

But, would cats like a plant, like lemongrass, cilantro, or celery? Although cats are primarily meat eaters, many, like Alfred in the following video, do enjoy noshing on a bit of celery from time to time:

Yes, your cat can eat celery! Celery can be a tasty and fun treat, if your cat is interested.

Just don’t be surprised if they don’t actually eat the celery. Since cats are meat eaters, many will just play with it or rip it apart, leaving a mess for you.

However, as you can see in the following video, even if they don’t enjoy eating the stalks, some cats are completely infatuated with celery leaves:

Kittens tend to be even more susceptible than adult cats to most things because they are tiny and are not yet fully developed. Though rare, any pathogens contaminating celery are more likely to affect a kitten than an adult cat.

Similarly, kittens could be more sensitive to the bloating and laxative effects from the fiber in celery. This could cause abdominal discomfort and diarrhea, possibly leading to dehydration and a trip to the vet.

Instead of celery, why not try giving your kitten a healthy kitten food like Blue Wilderness Kitten? This type of food has everything your kitten needs to grow up big and strong without giving them anything that could cause harm.

While celery is usually a safe snack for your adult cat, you should know they won’t really benefit nutritionally from eating celery. This is because cats are obligate carnivores, which means all they really need to eat is meat.

In fact, cats don’t actually need plants to meet their nutrient requirements. For example, humans need certain minimum amounts of vitamin K in their diet, so they must eat kale, lettuce, broccoli, cabbage, and other vitamin K-rich foods, like celery.

While cats need vitamin K to survive, they generally don’t need any additional vitamin K added to their diets. This is because bacteria in the cats’ intestines make plenty of vitamin K which they absorb, so they don’t need to eat plant-based foods to get enough.

It won’t hurt your cat to get a little extra; they just don’t require it.

Similarly, celery contains significant amounts of fiber. In humans, these indigestible carbohydrates can cause bloating and flatulence.

Cats don’t need fiber in their diet. When a cat eats food containing fiber, it can have a laxative effect on the cat resulting in runny stools and messy litter boxes.

Additionally, while celery is not considered toxic to cats, foodborne pathogens have been found on it. Listeria monocytogenes, E. Coli, and Norovirus are some of the species of bacteria and viruses which have been found on celery or celery products.

Contamination of celery is rare, and cats may not be affected in the same ways or as severely as humans. If you do decide to feed your cat celery, stay alert for any signs your cat may show from eating contaminated celery, such as the following symptoms:

Though unlikely, in severe cases, life-threatening septicaemia and endotoxemia may develop and infections could spread to different organs causing pneumonia, meningitis, and miscarriage in pregnant cats. To be safe, make sure you thoroughly wash celery before giving it to your cat.

Healthy Alternatives to Celery for Cats

There are many healthy alternatives to feeding your cat celery. If you really want your cat to have plant nutrition in their diet, try a cat food that has been formulated with plants that meets the feline’s specific nutritional needs.

Organix Dry Cat Food contains sweet potatoes along with real chicken so your cat can eat a healthy and balanced diet.

You can also try offering your cat some cat grass. Unlike regular grass, this is completely safe for cats to munch on, so it’s a great way to add some greenery to your home that your cat can safely eat.

So, can cats eat celery?

Now you know that cats can eat celery, though many cats might be more interested in playing with the leafy part of the plant than eating the stalks.

If you decide to give you cat celery, just follow these simple steps:

If you have any questions or would like to share a story about your cat and celery, please tell us in the comments below. We’d love to hear from you!